If I had to choose a favorite season, I would have to say Fall. At least that’s what the me at this stage in my life would say. Summer is for the kids. Spring was my love in college. I went to school in Northern Illinois and the winters were brutal. It was then, that I learned to appreciate the rebirth that comes with Spring.

Winter gets no love from me. Not now, at least. Maybe in my retirement years when I can hibernate and avoid it all. Fall, she’s special. The temperatures come down a little. Our clothes get a little more comfy and cozy. The leaves are changing. There’s pumpkin everything everywhere. For me, it’s a little like watching my favorite movie where someone dies. I know the ugly part is coming but I’m still going to enjoy the beauty while it lasts.

Fall has some fun traditions for many of us.

I love seeing all the Facebook photos of people going to apple orchards and pumpkin patches. There’s high school football and homecoming. Holidays include Halloween, Thanksgiving, and my birthday.

My immediate family has made a tradition of spending Thanksgiving in Branson. We rent a condo, usually near the lake. On Thanksgiving night, Silver Dollar City opens around 4 pm. We usually bundle up and head out to the park. If you haven’t experienced the lights and festivities at Silver Dollar City for the Christmas holiday, you’re missing out. It’s breathtaking!

This year, Silver Dollar City changed up their regular Harvest Festival, held at this time of year. They introduced Pumpkin Nights.

The park has never acknowledged Halloween before. The park works hard to make a family-friendly atmosphere which can be enjoyed by all, year round. This new festival happened to take place around my birthday. So we packed up the family and headed down a few weeks ago. I’m not sure if I can call it a Fall festival since it was in the 90’s and I was wearing shorts. Maybe next year there will be some leaves to go with that.

Throughout the park, there were lots of crafters selling their wares and doing demonstrations. There was a special Cirque du Soleil style show featuring lumberjacks. It was fantastic! Really makes me wonder what goes on in the woods, now. Of course, there was food galore. You will never go hungry at Silver Dollar City. They make big skillet meals with meat and veggies. I didn’t know I liked succotash until I had it there. We shared a caramel apple and an apple dumpling. Since it was my birthday, they gave me a button with my name on it. The staff at the park is so well-trained, everyone who saw me wished me a happy birthday.

The real attraction of Pumpkin Nights was the pumpkins. Over 2,000 pumpkins carved by Silver Dollar City artisans. They used plastic pumpkins so they will last the season and can be used again.

At the entrance of the pumpkin area is a giant scarecrow, nearly as tall as the barn he stands in front of. He has black pumpkin crows all around him. There’s a giant spider climbing one of the rides. There’s a big spider web overhead with lots of little spiders on it. At night, everything glows, including the web.

My favorite part was the pumpkin trail. A long trail with sections of themed, pumpkins. They carved all kinds of woodland creatures. The pumpkins stacked up into a campfire positioned in front of a tent was by far, the coolest. What you didn’t see was anything scary. There were no witches, or devils, or skeletons. It was all very Silver Dollar City. I didn’t hear anyone complaining. I appreciate the park figured out a way to celebrate a little Halloween but to stay true to their beliefs.

This past weekend, the park reached maximum capacity. They had to close admission until after 6:30 pm. People were waiting 2 hours to get on trams to get into the park. That’s even busier than any of the Christmas Festival weekends, including Thanksgiving. I would definitely go back. Maybe next year, I can wear my hoodie! 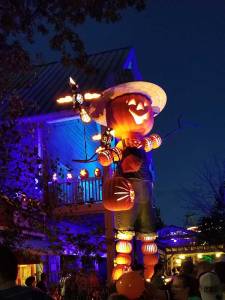