Every year, we take our staff to a Royals game as a team building event. It’s always a great time, and the game against the Baltimore Orioles on 8/24/15 was no exception.

In the first few innings, the Orioles looked strong and had the lead. The score was 3-1 going into the 6th inning. But that’s when then the Royals blew open the doors. They ended up scoring 7 runs in the 6th inning making the score 8-3.

It’s hard to describe the volume levels that we experienced in the stadium during the 6th inning.

Imagine yourself standing behind a 747 that suddenly hits full thrust on the engines. That might be close to how it felt when the crowd went wild. It was amazing and exhilarating. High fives between perfect strangers.

Here’s a quote from ESPN that tells how the 6th inning went:

Mike Moustakas hit a tying, two-run homer, and Omar Infante added a two-run triple moments later, scampering home when the throw to third base skittered away. Lorenzo Cain drove in two more, spoiling what had been a promising start by Ubaldo Jimenez.

We loved going to an exciting Royals game and getting to spend some time with each other outside of work! 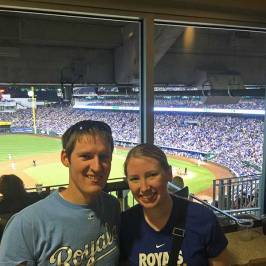 Paul and his family

Amy and her family

Jeremy and his son

Julie and her family